The poem posted here today was created by my daughter’s 4th grade class last year before school ended. Each child in the classroom wrote one line of the poem, then the children decided how to put it together.

Look at the clock

Ready to jump into a pool,

I am a mermaid.

I splash, I laugh.

Ice cold water is the rule.

Back to the park,

My trampoline is hot from the sun.

my cold pop and hopscotch.

I do what I want!

Don’t have to go to bed,

I wonder what will happen next…

I think the poem turned out pretty amazing. I hope it will inspire you to do a similar project with a group of kids. You could do it as a family project and write about different topics.

Have a creative summer! 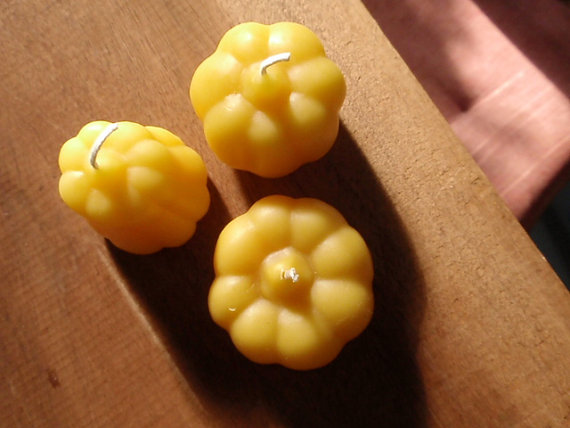 Passed down through the generations, spoken next to the hearth on a cold winter night, lavishly illustrated in cherished books, sung to babes in their cradles… Fairy tales, folk tales, nursery rhymes and fables all have a place in our hearts and our history.  We hope you enjoy the results of our recent team challenge to create, and be inspired by, these wonderful tales.

Once upon a time…

What are your favorite tales?  Do you have fond memories of them being read to you as a child, did you act them out in a school play, or have a grandparent whisper them in your ear at bedtime? 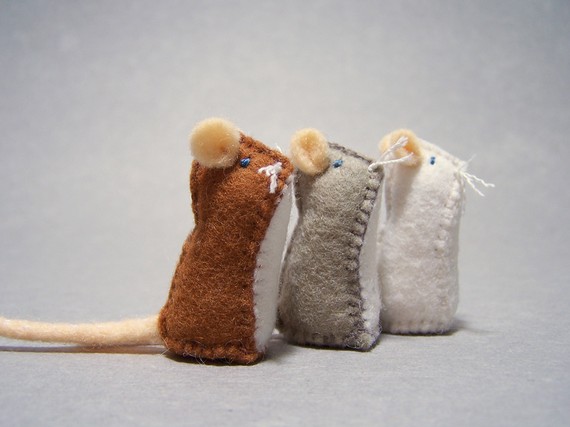 When my daughter was two years old, I read her the story of The Boy Who Cried Wolf from Jack Kent’s Fables of Aesop. The boy who is supposed to watch the sheep calls out, “Wolf, wolf!” and when all the villagers come running, the boy reveals that it was just a joke. He tries this again, with the same results. When a wolf actually does show up one day, the villagers refuse to answer the boy’s call for help, so the wolf devours a sheep and gets away.

My daughter thought this story was hilarious. “Wolf, wolf!” she exclaimed over the next few days, and brought her “Wolf Book” for me to reread to her. I thought about the times in my public library work where people asked me for children’s books with clear-cut morals, sometimes known as didactic stories. I did my job to help them find the books they wanted, but was grateful when they were open to stories that imparted life lessons in ways that invited the listeners to mull over the implications of the characters’ actions, rather than have the morals handed to them.

Master storyteller Margaret Read MacDonald  has written in picture-book form a number of folktales and fairytales upon which I rely for read-alouds and oral storytimes. When I want to convey that “happiness is wanting what you have,” I tell the British story The Old Woman Who Lived in a Vinegar Bottle, which is evocative of The Fisherman and His Wife, but has more humor. For resistance of blind obedience to authority and reliance upon one’s own common sense, I go to the Limba (Camaroon) story of Mabela the Clever. The folktale I quote most often to my daughter is the Balinese story Go to Sleep, Gecko! in which the message is, “Everything is connected. Some things you just have to put up with.”

What stories resonate with you? While you think about that question, please feel welcome to enjoy some of the offerings from the NaturalKids Team that complement the above-mentioned stories as props for storytimes and open-ended play:

For The Old Woman Who Lived in  a Vinegar Bottle: 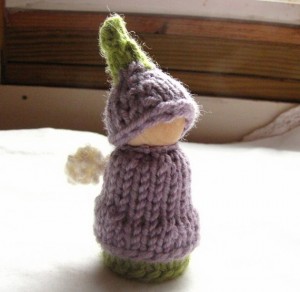 A purple fairy from This Cosy Life

A blue fairy from Alkelda (that’s me!) 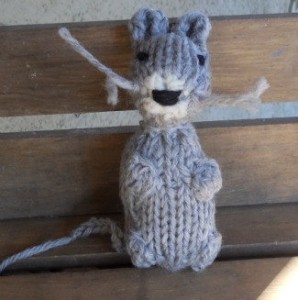 A mouse from Woolies 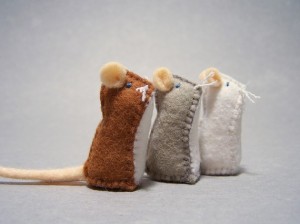 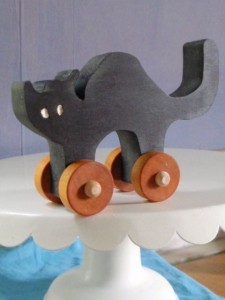 A cat from Pretty Dreamer

For Go to Sleep, Gecko! 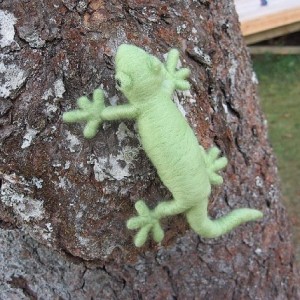 This is a small sampling of handmade creations that the NaturalKids team has to offer. Your imagination can turn ordinary household objects into storytelling props, too. How else could the dish run away with the spoon?

Please share in the comments section the stories you like in particular. I really do want to know.

–Farida Dowler is a children’s librarian-turned-freelance musical storyteller in Seattle, Washington. She sews wool felt figures for the Etsy shop Alkelda, makes up silly songs on the guitar, and reads science-fiction.

Children are natural storytellers who will often imagine their own stories based upon their outward surroundings and their internal landscapes. We grownups, however, often need some assistance with reawakening our imaginations.

Here comes the NaturalKids Team to the rescue! Sure, you can tell a convincing Snow White and the Seven Dwarfs with salt and pepper shakers, condiments jars, plus seven thimbles. However, the talented members of Etsy’s NaturalKids Team have hand-crafted a variety of figures for your folk and fairy tale storytelling as well as open-ended play. All fairy tales in this post link to Sur La Lune Fairytales.com 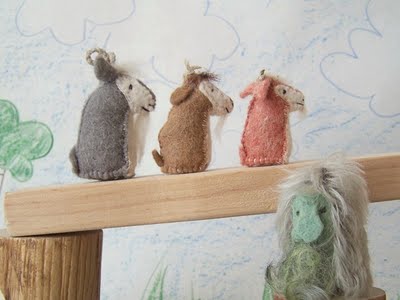 Snow White and Rose Red by Nushkie (plus you could add a bear by Woolies and gnome— to play the dwarf– by Little Elfs Toy Shop):

Cinderella by The Enchanted Cupboard: 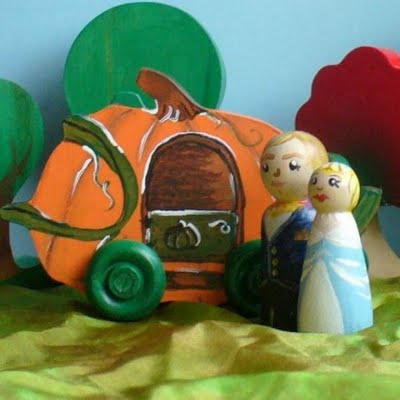 The Gingerbread Man, by lovealittle 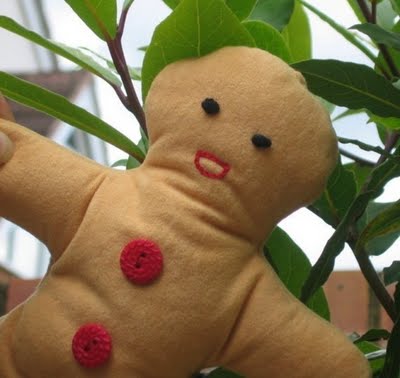 The Fisherman and His Wife, by Driaa:

Story: The Fisherman and His Wife

What are stories that you enjoy telling with your children?

–Farida Dowler is a children’s librarian in semi-retirement. She works as a freelance storyteller and makes dolls for the Etsy shop Alkelda.

What are the sources of our inspiration? Where do we, as artists, mothers, fathers, teachers, chefs and community members, find fuel to light the sparks of creativity within us?

For one NaturalKids member, Farida (you can visit her magical shop, Alkelda, here) stories and storytelling are closely woven into her artistry, and her life. “I create figures for people to use in nature table displays and in storytelling for folk tales, fairy tales, saints’ legends, therapy… wherever the imagination leads.”

We are thrilled to announce that starting very soon, Farida (of Alkelda) will be regularly posting interesting and delightful book suggestions on this blog. Our new blog bookshelf will be a fresh new feature for our minds, hearts, and imaginations. 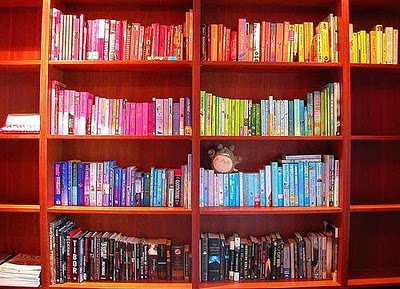 This week, Farida curated an Etsy Treasury based on the inspiration she found in a wonderful story called Sand Flat Shadows – you can read it here. Here is the collection of handmade pieces she put together, a collection you can also see here for the next few days: 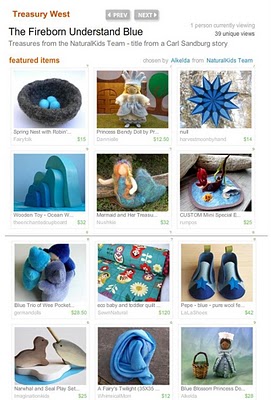 Here is one of the lovely dolls in Alkelda’s shop, the Blue Blossom princess, ready for gentle play on your nature table or woven into your stories! 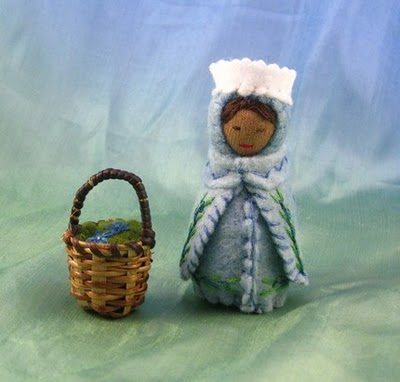