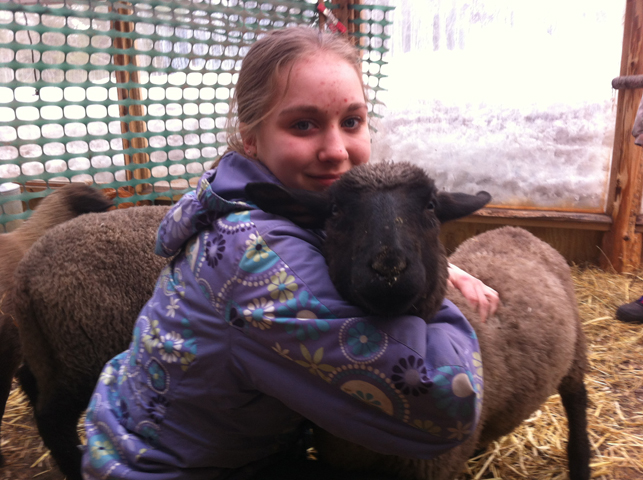 Playsilks and Swords and Shields, OH MY! We recently came across a photo of a boy who was not afraid to play. His imagination was wondrous!

Wondrous and amazing…very much like this mosaic shield. Made from a blank shield from our shop and then sold at an auction to help raise funds for the Portland Waldorf School in Portland, Oregon.

The mosaic shield reminds me so much of our life…with the family in the center, the heart, the hearth, the fiery life-force. Then, branching off of the heart center are our many activities in which we are involved. Each day is filled with a bit of this and a bit of that…from eating healthy foods, to homeschooling, to farming, to making toys. These past few weeks have found us in the woods. Many blessings are upon us!

And little lambs have arrived!

It only gets livelier from here on out! Garden starts are ready to be planted. Piggies are due to arrive April 20th and bees shortly thereafter. Festivals and art shows are in the not so distant future…which brings us back to our shop…BirchLeaf Designs…Playsilks and Swords and Shields, OH MY…

Wendy, Mojo and their 2 children, Kiah and Milo live, homeschool, farm, and make toys off the grid near Marquette, Michigan. Please visit their shops at http://www.birchleafdesigns.etsy.com and http://www.northernchildren.etsy.com