Please let me lead you into a little piece of heaven on Earth from my region. It’s a beautiful garden that became a prime touristic destination in the area. In the summer of 1926, Elsie Reford began transforming her fishing camp on the Metis River into a garden. Located 220 miles north-east of Quebec City, at 48.51º N. latitude, the gardens she created over the next thirty years were the northernmost in the eastern half of North America. Known to some as Les Jardins de Métis, to others as Reford Gardens, the gardens have become famous since they were opened to the public in 1962. It was our usual end-of-year trip at my primary school and a favourite place to go when we had family coming over the summer. Last June was it’s 50th anniversary and the entry price was only 50¢ (the price from 1962!) so I grabbed the occasion to show the garden to a friend that just moved into the region and I also grabbed my camera, hoping you’ll enjoy the photo tour! 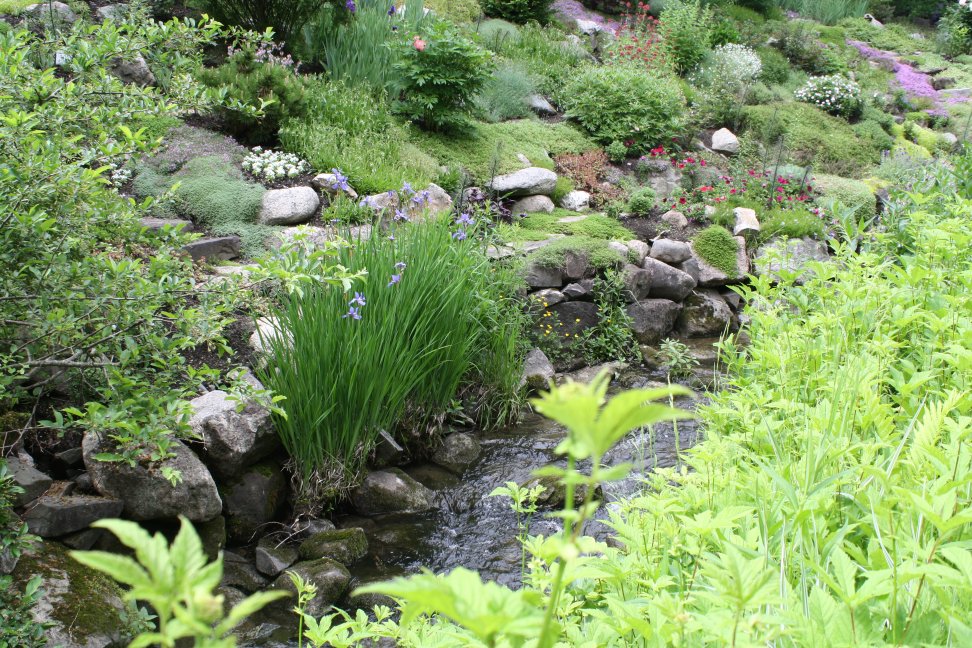 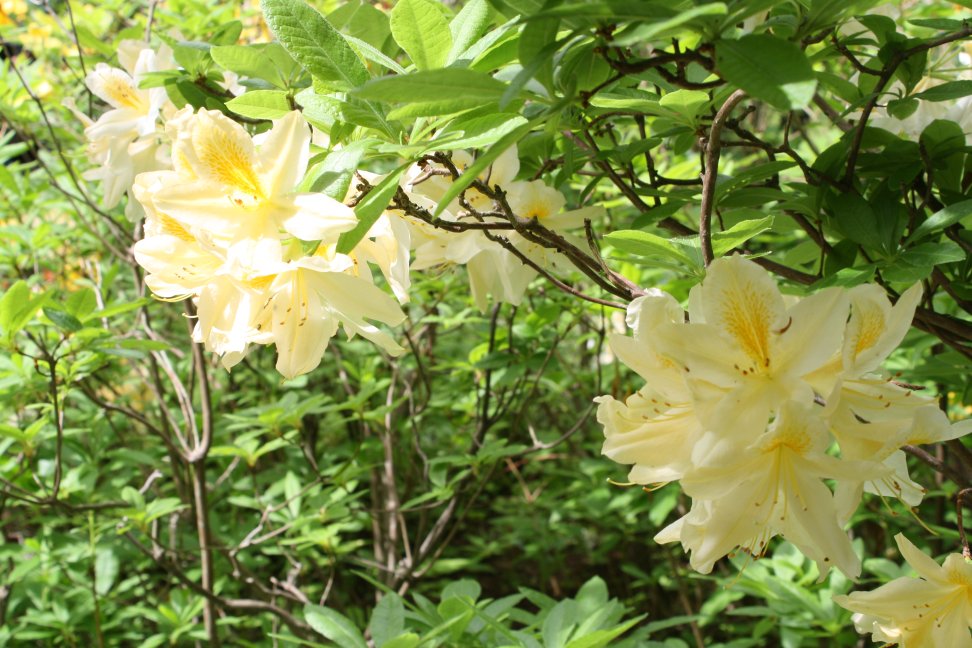 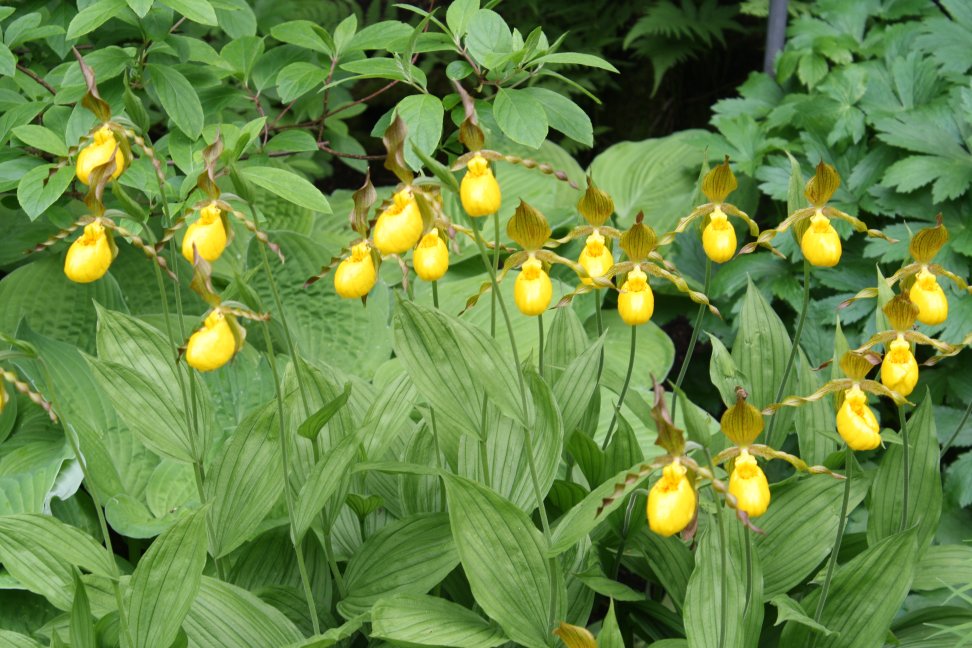 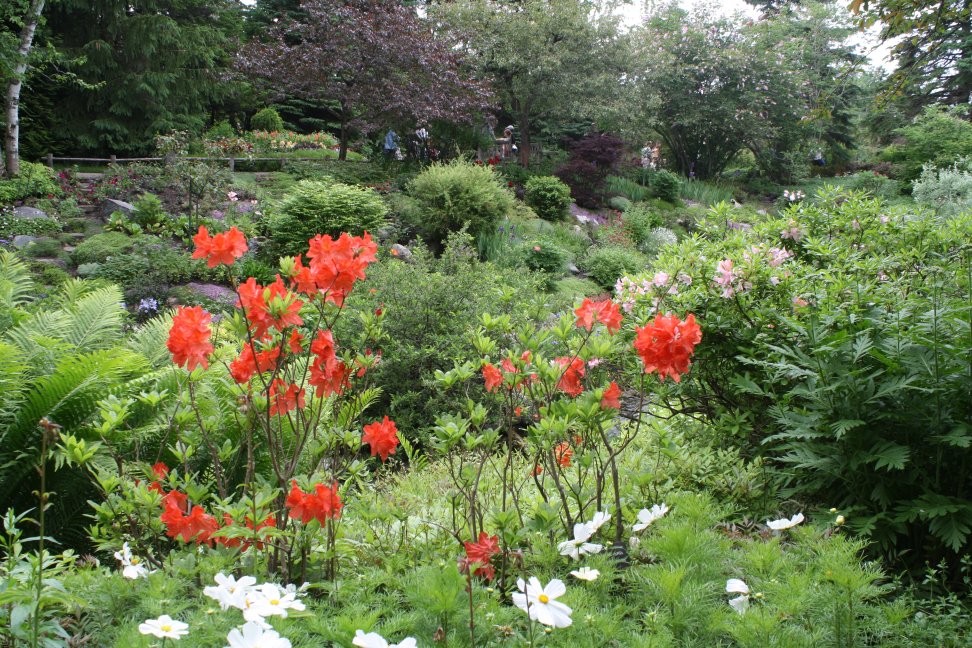 Gardening was by no means Elsie Reford’s  first calling. From the early 1900s she had come to Grand-Metis to fish the pools on the river. She also rode, canoed and hunted. She continued fishing until 1926 when an operation for appendicitis intervened. Ordered to convalesce following surgery, her doctor suggested gardening as a genteel alternative to fishing. She was 54 years old. During the summer of 1926, she began laying out the gardens and supervised their construction. The gardens would take ten years to build. The construction would extend over more than twenty acres. When she began, with the exception of a flagpole, a cedar hedge and a tree-lined driveway, the property was barely landscaped at all. The hay was cut to provide feed for the horses. Flowerpots were arranged on the veranda. It was, after all, a fishing lodge. 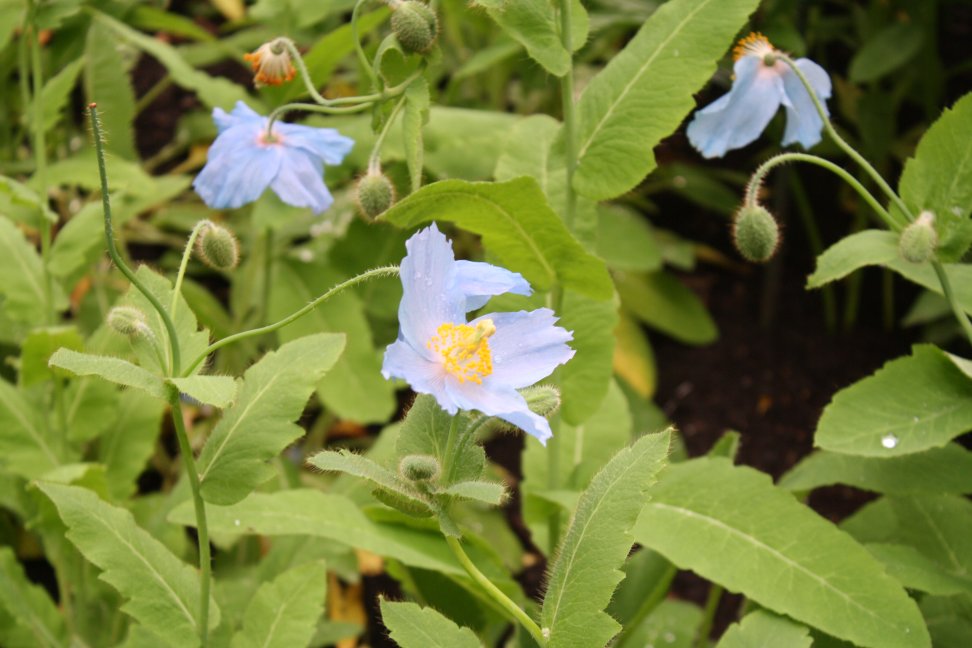 “Lilacs were marvelous, azaleas very brilliant but I sometimes wonder if the sweeps of blue poppies are not the most satisfying, for apart from their great beauty they outlast everything else for length of time of flowering. They have now been giving much delight for almost a month.”

The Blue Poppy Glade was so named because it was where Elsie Reford displayed one of her rarest and most enchanting plants. The Himalayan blue poppy (Meconopsis betonicifolia) is one of the marvels of the plant world. Native to the Tsangpo Gorge in the southeast corner of Tibet, it grows at altitudes of 3,120 to 4,000 metres (10,200 to 13,100 feet). These blue poppies are the progeny of the first plants that Elsie Reford grew from seed in the 1930s. Intrigued by the enthusiasm it generated, she was among the first gardeners in North America to try the seeds, obtained from the Royal Botanic Gardens in Edinburgh, Scotland. Nestled between martagon lilies (Lilium martagon var. album) and maidenhair ferns (Adiantum pedatum), the blue poppies bloom from the middle of June through the end of July. Notoriously difficult to grow, part of our success is due to the climate of the Lower St.Lawrence, which provides the plants with the humidity and cool night air that the Meconopsis enjoy.

This flower became an icon of the region, and it really is beautiful to see! Hope you liked the visit, and if you ever come into the beautiful region of Mitis, you’ll find that the people are as charming as the landscape.

Information and facts taken from the Reford Gardens website. All pictures by me.

One of summer’s biggest outdoor fun is to blow bubbles. But when you have little ones around, loosing the tiny plastic bubble wands is a very easy thing to do! Plus, they only make tiny bubbles. I decided I would try my hand at making wire ones like I saw around on the internet and I was pleased at how easy they are to make! Let me show you how we (me and my 4 year old) did! 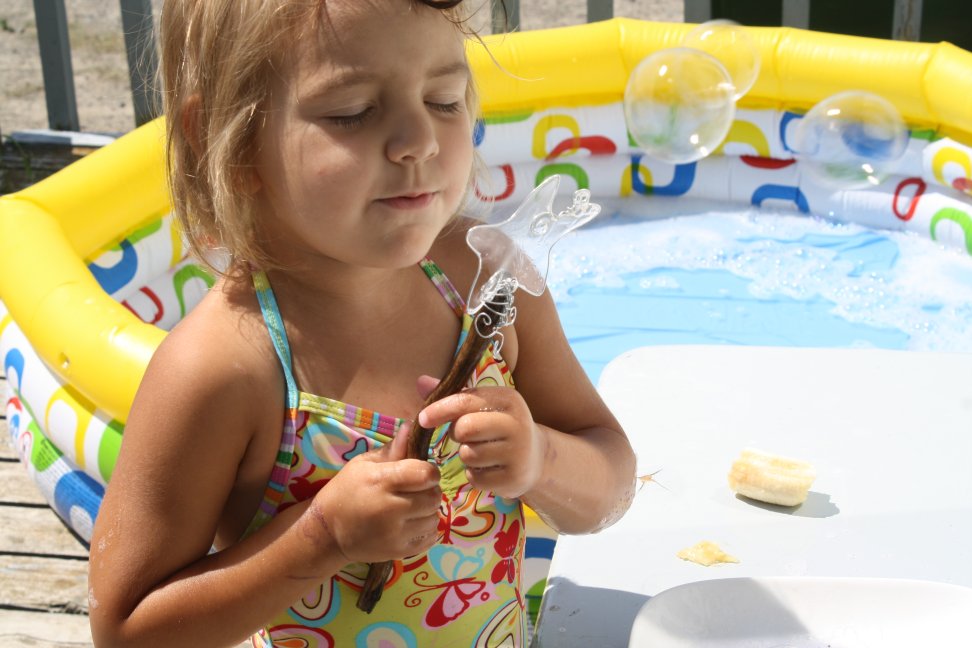 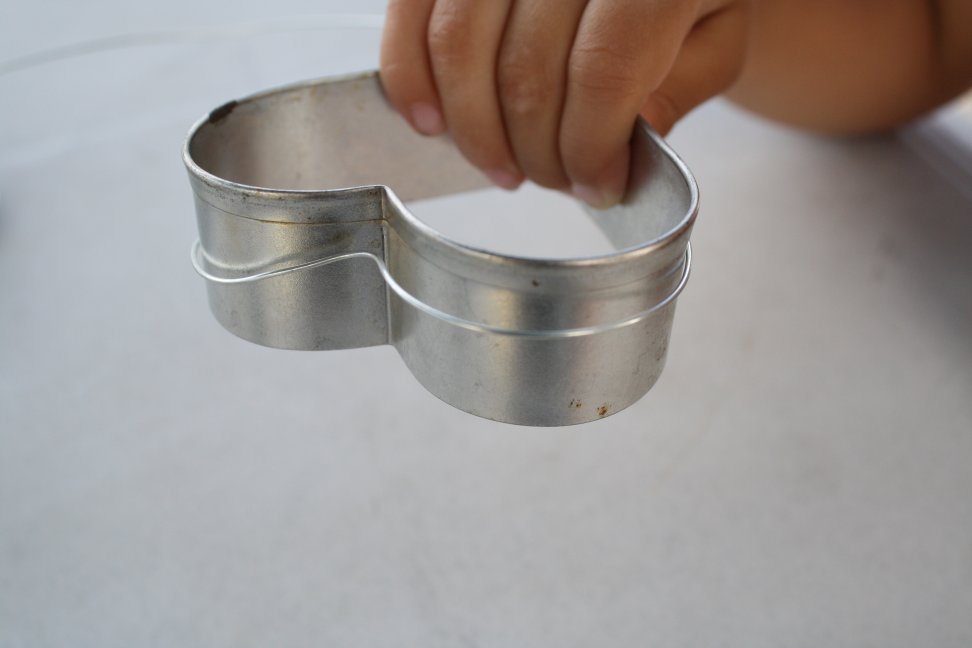 Wrap wire around chosen cookie cutter. Take care to leave some loose so the wire overlaps itself. 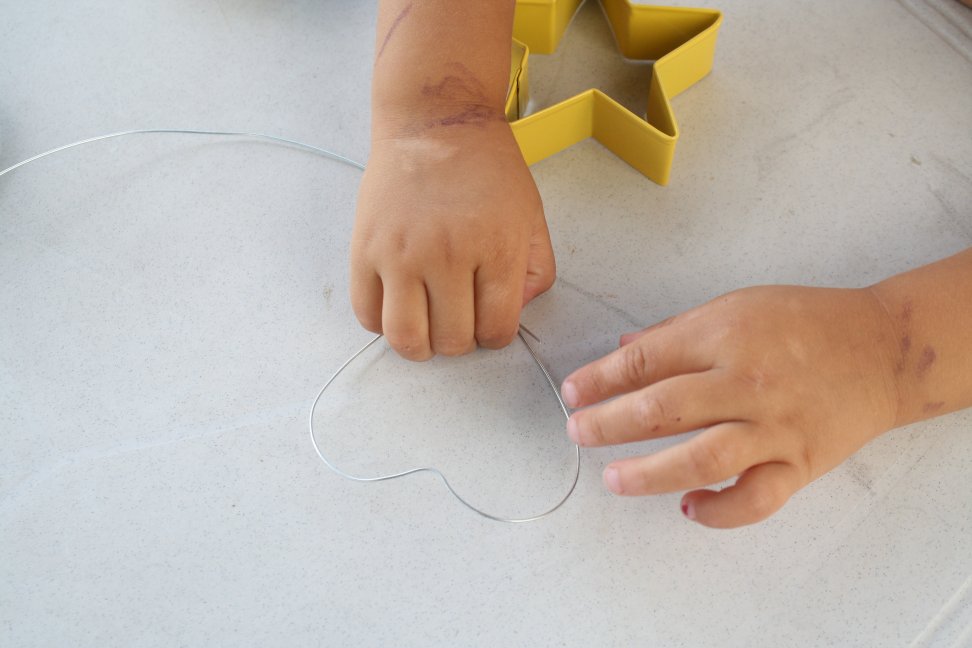 This the excess around itself, and leave a good length of the other end before cutting. Wrap your shape around your stick.

That quick, that simple! and you have an awesome magical bubble wand! Now you only need to mix one part dish soap with one part water and pour the mix in a plate. Dip your wand in it and blow, or wave you hand! 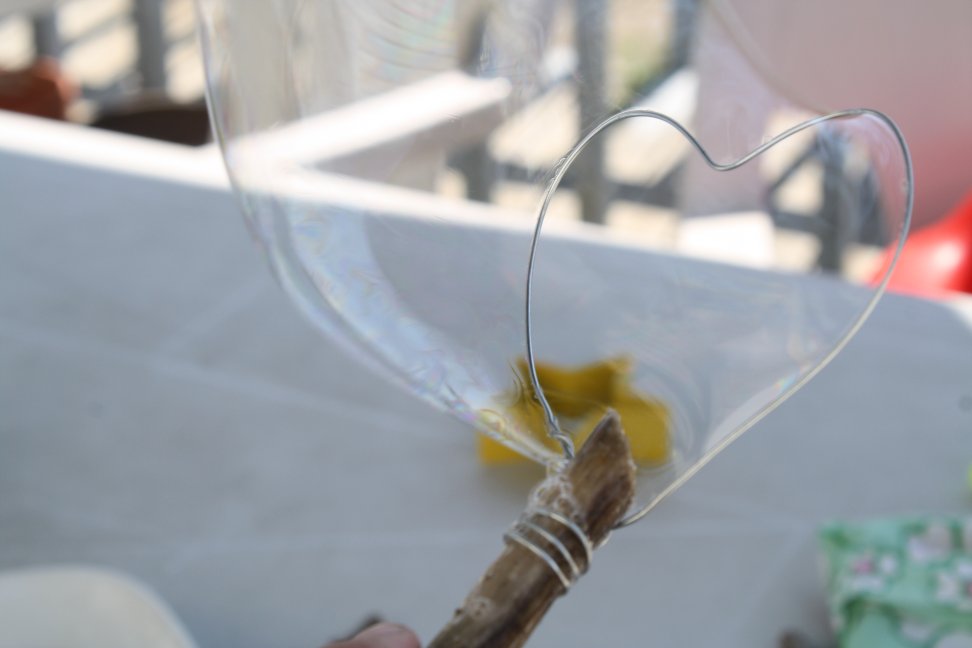 You can let your creativity go from the basic shape, and even choose not to use cookie cutter as a guide. Kids like them so much better then the little plastic ones. Go try to make one, but I warn you, it’s addictive and soon you’ll have tons in stock- perfect for summer birthdays!

Written by
NKTAdmin
Posted in
imagination, play, summer, tutorials
Tagged
children, felt, handmade toys
Comments
6 Comments
When my daughter got in age of playing with playfood, I became obsessed at making them. She now has a bin filled with various food I made her from vedgies to dessert to sushies. Today I want to show you how I made a lettuce! 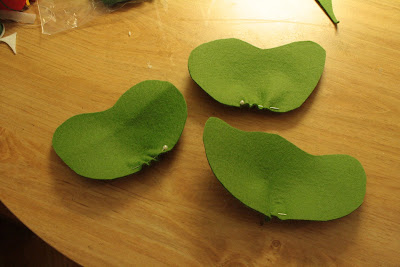 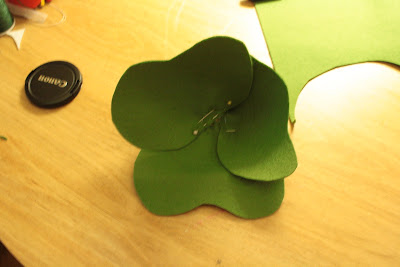 See how they look together, edit the cut if needed. 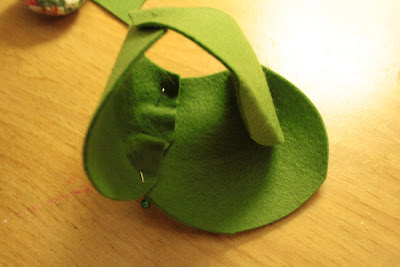 Cut 3 smaller pieces, pin together. Sew following the piece on top untill 3/4 up.

Cut a rectangle, square or circle (I used a leftover) And push it inside. 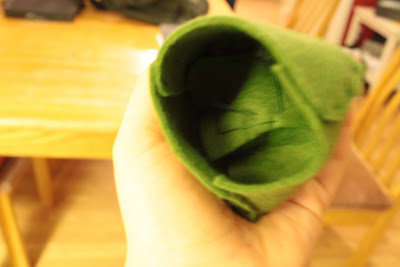 Sew at some corners, so that you don’t see any edges from the top. 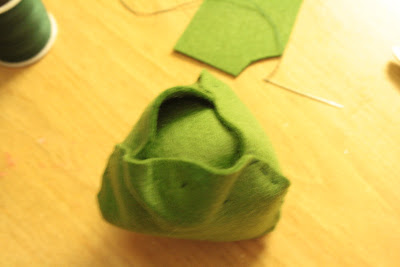 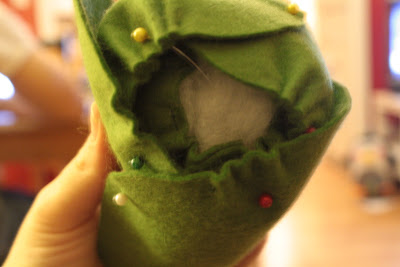 Attach the biggest leaves to see where you place them. 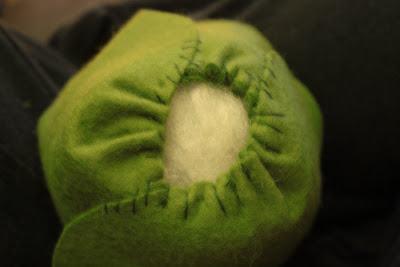 Sew them on with an overcast stitch. 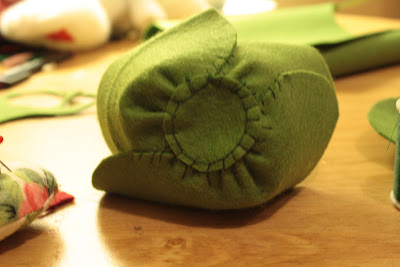 Cut a circle, Blanket stitch it to the bottom so we don’t see any stuffing. 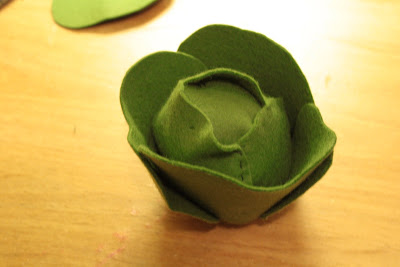 The Summer Solstice might be my favorite holiday.  The earth is at last warm again and the lilac trees are full of flowers. School is over and pools are opening!

To celebrate the longest day, I made this very simple wand that takes no time to assemble. 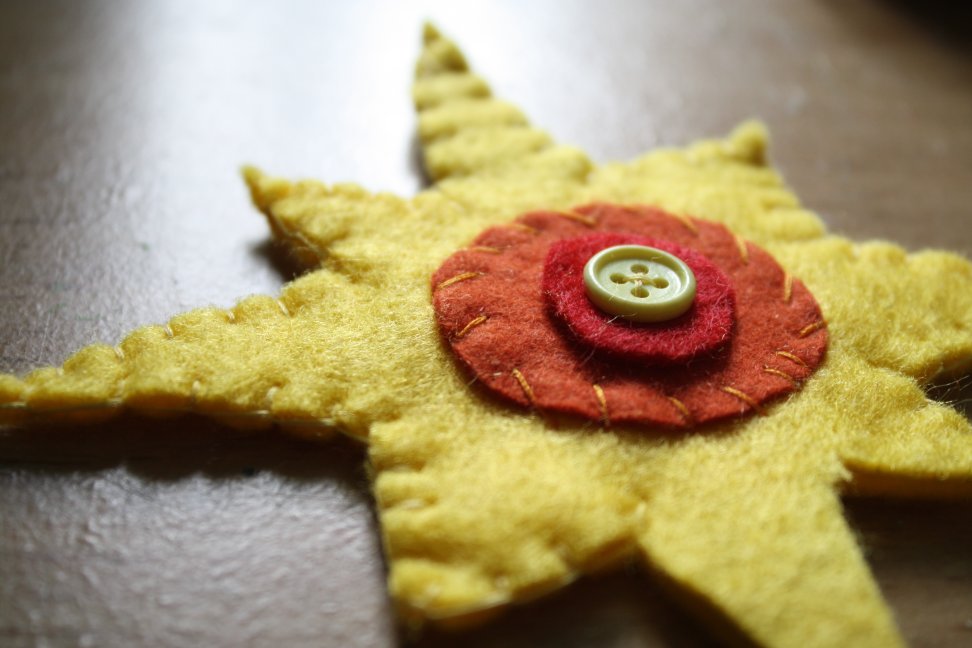 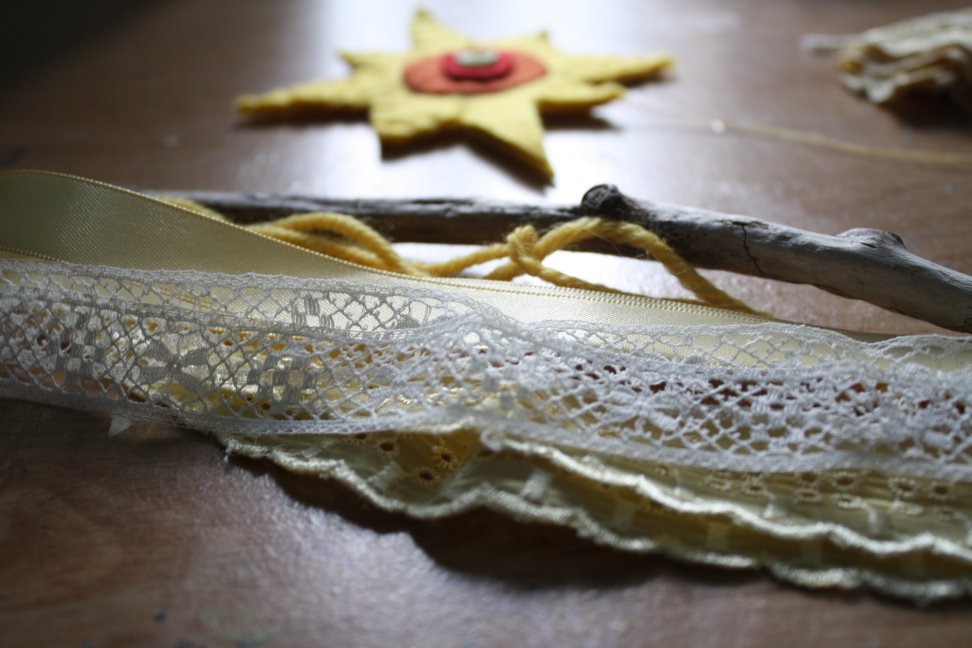 Wow, it’s nearly May!  It’s so hard to believe that summer is just around the corner.   Make sure you stop back later this week to check out the NaturalKids Summer Gift Guide when it arrives!

Also, if you haven’t yet participated in the Earth Day Giveaway, there is still time!  Today is the last day, so make sure to enter right away – so many goodies to win, and your chances are pretty good.

Summer has me thinking about planting gardens, picking flowers, and plenty of dreaming about the little farming homestead I hope to eventually have.  Here are some of my favorite NaturalKids picks for farming fun:

The Magic Onions blog by FairyFolk is running a Fairy Garden Contest – many great ideas and inspiration, and many prized provided by members of the NaturalKids Team!

This book was first published in the USA in 1946, and earlier in Sweden. It is part of a series of books about boy triplets and their adventures. I love them all, they are fun, and all available as reasonably priced paperbacks today. Snipp, Snapp and Snurr are the names of the boys (there is a girl series too) and Maj Lindman sure knew what trouble boys could get up to!

Take, for instance the above title. It is a great summer read, especially as a ‘first reader’, and I love the antics of these boys as they have a little vacation at the cottage with Nanny. The book comes with a little disclaimer at the beginning about safety and here is why…
It is 2011 out there!! These boys go play in/on the water and can’t swim and let me tell you, there isn’t even a hint of a PFD (personal flotation device). No pool noodles. No inflatable dolphins. I know!!! There is a boat, a tub, a sailboat and some good ole fashioned fun with a rescue and all… and then there are swimming lessons. Whew! You won’t learn to swim with this book, but you will take a pleasant little trip back to when things were just a little simpler~ maybe not safer though!!
Hope you have fun at the beach and play safe (ie: sunscreen & pfd’s!).
Natalie of Woolhalla

Talk about small-scale gardening! Making a fairy garden together with your child(ren) can be a lot of fun. It can happen in a small space, including inside in a planter, so you can make one anywhere really.

Below are some photos from The Magic Onions blog, from team member Donni at Fairyfolk. 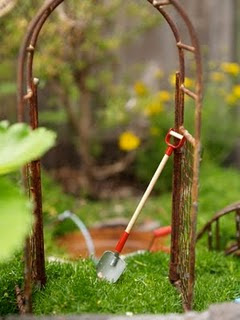 A little moment of tranquility… 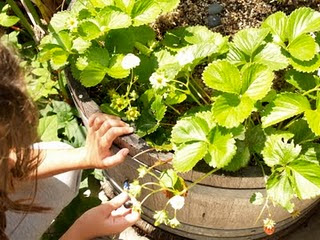 Here is an outside planter box/barrel of strawberries.
Mmm… I think fairies like strawberries a lot!!
Find a little spot to create your fairy garden. 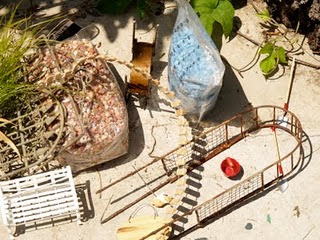 Collect some supplies. You can buy cute little things to put in it or make them. Built with popsicle sticks and glue, wool scraps, marbles, moss, whatever you have on hand. 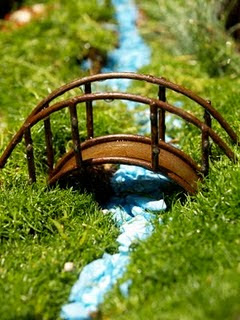 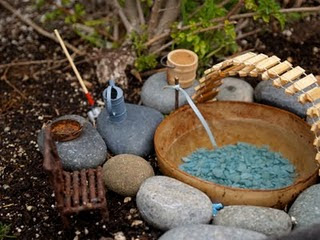 Rocks and a bowl can be turned into a cute little fairy scene. 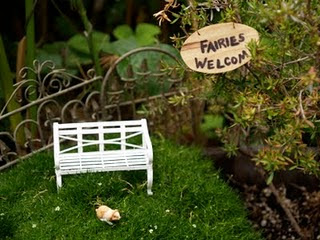 When you’re done, you can make a sign. Then sit back and wait to see if you might catch a glimpse of a fairy in your new little garden!

Photos by Donni at The Magic Onions.
Text by Natalie of Woolhalla.

Kids love bugs and insects… well most of them anyways! Summertime is ‘bug season’ in many places and Natural Kids team members have some photos to share… Do you know what they all are? Put your answers in the comments!!

Photo 1: By Donni at Fairyfolk

Photo 2: By Donni at Fairyfolk

Photo 3: By Donni at Fairyfolk

Photo 4: By Donni at Fairyfolk 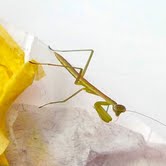 Photo 5: By Michelle at Babus Toys

Photo 6: By Ann at Harvest Moon by Hand
So what do you think? Do you know what they all are, do your kids know what they are??
Let’s hope I have it right… we’ll see! Post your answers in the comments!!
Thank you team members for sharing your photos!!
Natalie of Woolhalla

This activity is perfect for a hot sunny day. Here’s what we did…you can modify amounts depending on how many children are around!
Recipe:
7 children
5 boxes cornstarch
Aprox. the same amount of water.
Method:
Dump your cornstarch into a large container. Hold one box in reserve just in case you add too much water. Start adding water gradually while the children mix with their hands.

Add water and keep mixing until it is the consistency of pancake batter. Your mixture will become more fluid as the kids work it with their hands.

Cornstarch and water make a magical concoction. If you hit it with your hand, it feels hard. If you grab a clump, it feels thick like clay and if you try to pick it up, it dribbles from your hands in streams.

The kids loved pouring it on their hands and legs and even rubbing it on their faces. It dries very quickly to a clean powder. I had a group of kids aged 3-10 and they all had fun playing with this stuff!

The kids in my backyard used a 100 gallon horse trough to clean up. I used a garden hose to spray the picnic table clean and the leftover gunk went into the compost heap!

Add some watermelon slices and your sunny afternoon is complete!
Blog Topics