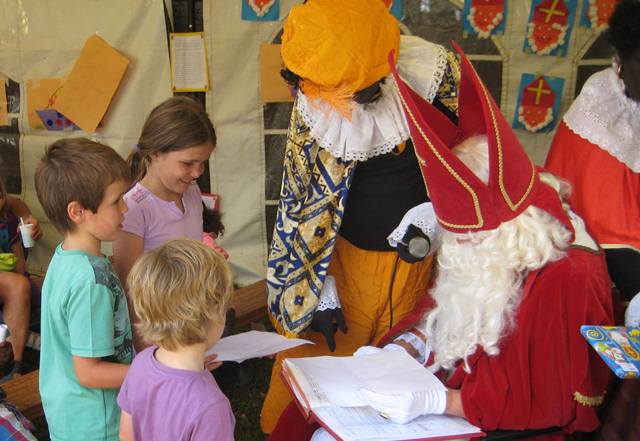 There are many ways of making the Advent season meaningful.  In our society where the holiday season for children often means a big case of the “gimmies”, how can we celebrate in a way that brings meaning to the season? Or rather uncovers the meaning already present.

In the coming weeks we will be writing a series of posts called December traditions.  Here is the second in the series, this time about celebrating Saint Nicholas.

Our family, an interesting patchwork, has three nationalities among it with five different countries of birth.  The children identify with their countries of birth, so the flag of the country is an important symbol in our home.   If had ever wanted to design it like this, it would have never worked.  So nature just threw us this patchwork.

When December comes around, the celebrations of the parents’ cultures seem to take over though.  Our first celebration is that of St. Nicholas, the patron Saint of Children.

Preparations start in the middle of November, when St. Nicholas officially arrives in the Netherlands in preparation for his birthday on December 6.  This event is broadcasted on TV and this year we managed to experience it though the internet.

In the three weeks leading up to December 6, kids are allowed to put our their shoe in the evening with their wish list, drawings and a carrot for St. Nicholas’ horse.  However, since St. Nicholas, or Sinterklaas in Dutch, and his helpers ‘de pieten’ are such busy people, we only put the shoes out once a week.  The next morning, the kids are delighted that they were not forgotten in the far-away Kenya, and find a chocolate coin or two in their shoes. On the morning of December 6, there is also a small gift from the good Saint and his helper, who on that day quietly return to Spain to prepare for the next trip to the Netherlands in eleven months!  December 6 is also ‘Nikolaus’ in Germany, so Dutch and German culture meet that morning, although ‘Nikolaus’ does not come from Spain and has only one helper with him, ‘Knecht Ruprecht’.

Now that we live in a city with a larger Dutch expat population, Sinterklaas and some Pieten do pay a personal visit during the day and the children have a chance to meet them up close and personal!  The children are excited that Sinterklaas manages to even come to Kenya with so many children already wanting to see him in the Netherlands and Belgium.   Here are my three with Sint en Piet this Saturday. 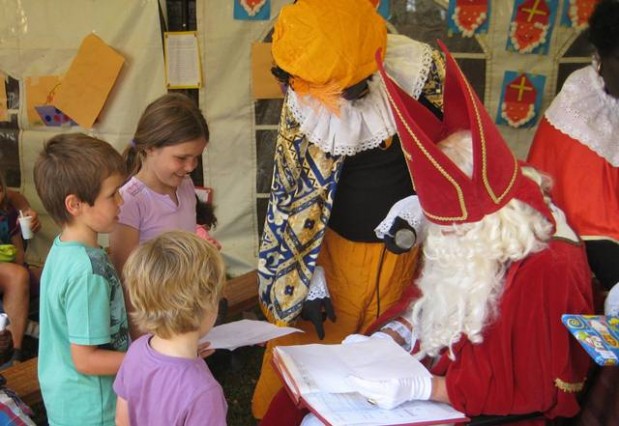 Do you celebrate St. Nicholas?  If so, what does your celebration look like?

More about our traditional German advent celebrations will follow soon. . .