Broken. My favorite serving bowl broke recently. I served many a good meal to dear friends from it. I loved that stupid bowl so much. Had it for over ten years. Now what? Can it be fixed?

Some stuff just can’t.  I have been reading the papers,  listening to the radio, and watching TV.  For over a week now they all talk about September 11th and what people were doing that day. The kids come home from school. My 10-year-old had a nightmare last night over the old news footage they showed her at school. My son’s project: Interview your parents about what they were doing on September 11th.

How can I explain this one to my son? I am so glad he doesn’t remember… 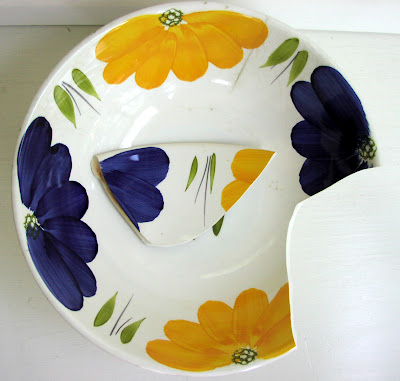 I am sick of it all. I really don’t want to think about the pain any more. Tried to forget and bury it along with the rubble.  Has it been 10 years, really?  Nobody I personally knew died that day. Yet I remember a traumatic event tied to that very day. A friendship of mine that was of great importance to me died that day. It nearly broke my heart.

How come? I won’t say her real name for fear of her coming across this piece by chance. I’ll just call her K._______.

She was the first real friend I had made since moving to the US. Seemed like we had so many things in common. We worked at the same place. She lived in a little old house like mine. We had kids the same age.  Her son J.____ went to preschool with my son. K. _____ spoke German. She had studied it in college. Wanted her kids to learn German. She had spent some time in Germany, too. She loved things German. I suppose I fell into that category.

Then this awful thing happened. September 11th. Nobody I know died. Yet I am in mourning each year around that time. I lost my friend K._____.  All of sudden we couldn’t talk anymore. Every conversation turned into an argument, an argument about how all people from the Middle East – foreigners – were evil. Could not be trusted. I tried to reason with sweet K._____. The young woman who had babysat my son while I was in the hospital giving birth to our second babe.

What happened only 6 month later? I never found an explanation for it all. K._____  just disappeared from my life. She ended all playdates. My son who had been inseparable from his friend, K.____ ‘s Kid, was never allowed to play with him again. Our weekly “German” playdates stopped abruptly never to resume again. I would call her and ask why. I never got an answer. I felt like a jilted lover or something. I’d lay awake at night writing letters in my head: Why K._____? I did not fly those airplanes into the World Trade Center! I am a German immigrant. The fact that I have Muslim friends in Germany does not make me a bad person! If you can’t love me any more why take it out on my child? My son loved his friend.

On September 11, 2001 many things died. Among the casualties were friendship and trust. I felt that this event somehow brought my “being other”  into focus in this small US town where I live.  At first it was just a feeling. But the end of the relationship with K._____ brought this point home with me.  Being different in America can be a very scary thing.  I am dumbfounded at how a nation founded by immigrants often likes to forget this very fact.  How sometimes reason can go out the window and paranoia take over.  And how do you explain that to a 3-year-old child who is asking to see his friend? How do you explain these things to a 3, 10, or 13-year-old? When people go from love to hate  is hard to explain.

I will never forgive Osama Bin Laden for that one. The human tragedy hit on so many levels that awful day…

6 thoughts on “Of Broken Things…”