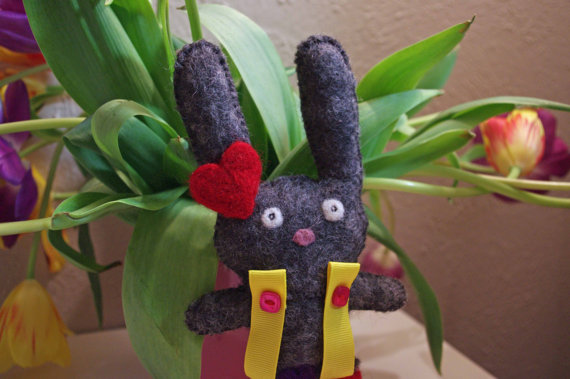 I asked members of the Natural Kids Team if they would share some of the stories and experiences that inspired their creations. Here is the link for the first set of narratives: Why I Made It, Part 1.  Read on for more “behind-the-scenes” glimpses!

Ariana Lyriotakis-Macdonald of Niko and Nonnie:

I wanted to share “Some Bunny to Love” which I have added to my shop for Valentine’s Day. I already have an organic bunny and carrot playset in my shop for spring, so I took my cue from that. My children absolutely adore bunnies and I thought it might be interesting for them to have some playmates made from wool felt with needle felted details. So much of their room is taken over by plush stuffed animals, and I wanted to make something whose “fur” wouldn’t get matted down with excessive play.

Beccijo Neff of The Enchanted Cupboard:

In Christmas of 2010,  I got an email from a desperate mother who found me on the internet. Her son asked Santa for a box he could play with where inside was Mr. and Mrs. Brown’s kitchen with Amelia Bedelia and the dog [based on the popular books by Peggy Parish]. The mother tried to explain to her son that no toy existed, but he insisted that he was such a good boy this year, and Santa would make it for him.  She said he was a very good boy, and he truly believed that it would be there Christmas morning, so she had to try to find one. She found my listing for my large custom playbox, and I was able to create for him what he was dreaming of! The mother let me know that he was so happy on Christmas morning, and took his playbox with him everywhere! At the time of the request, I didn’t understand the copyright laws and thought if the writer had passed away, it was then public domain. So, I cannot make this same playbox,  but I can create a different custom playbox.

My daughter loves babies. She has always been obsessed with them. When she sees a mom with a little one, she will walk up and ask to hold them and pet them (kind of like kids with a cute dog). Sometimes with newborn infants, that’s not such a good idea. So. I thought I make her some little ones to go with her dolls. She can have all the colors in the world, and hug and pet them to her hearts content.  Best thing, though: The dolls carry the babies in the pocketdress. That way they don’t get lost…much!

I made the zebra because I have always wanted to go to Africa, and see what zebras look like in the wild. Their markings are so beautiful yet simple. The tail of the zebra stuffie is braided because when I look quickly at a zebra’s tail, to me, it looks braided…but it’s all an illusion created by the stripes. Since zebras are part of the horse family, when I was younger I thought it would be fun to have pet zebras – they could enjoy grazing in the pasture, galloping/running… all without lions and other predators. Since I live in Minnesota, that’s not a practical environment for a zebra…so I return to my dream of one day going to Africa. 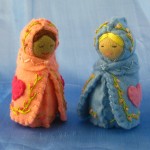 Farida Dowler of Alkelda Dolls lives in Seattle, Washington, USA, with her husband and daughter. Saints and Spinners is her song and storytelling blog. She enjoys finding out what you think and what you like.

One thought on “Why I Made It: Artisans tell the stories that inspired their creations (Part 2)”