My childrens’ favorite food in whole wide world is “Spaetzle”. When I mention the word Spaetzle they jump for joy and want to help make them. That is a good thing because though easy to make they are a bit labor intensive.

My kids are 11 and 13 now. I first let them help with this task when they were around 8 years old since the process involves dropping noodles into boiling water…

It’s really that simple. I was once told by a Schwaebian guy (Schwabenland is where these type of noodles originate from – the southern parts of Germany) that the true Schwaebian housewife uses no water – just eggs – to make Spaetzle. But who can afford this many eggs or that much cholesterol?

So I usually go with about 500- 600g of flour, 1/8 of a liter of water, 1 teaspoon of salt, and as many eggs as it takes to work the flour into a dough that can be stirred with a wooden spoon. Not too liquid not too hard. You don’t want any lumps.

While the whole family takes turns stirring the dough and working it into a smooth dough one must bring a large pot of water to boil. The pot needs to filled almost to the brim, maybe leave about an inch less. Then put a batch of the dough on a cutting board. My kids like to take turns cutting noodles with a knife and scraping bits of dough into the boiling water. Once that batch is cut and all of the noodles float to the top you scoop them out with a slotted spoon into a colander. We give them a quick rinse over the sink and then safe them in another bowl.

These German egg noodles are great as a side dish with any fancy dinner. But they can also stand by themselves as a dish layered in a casserole pan with some caramelized onions and Jarlsberg cheese. In this version they are called “Kaesespaetzle”. People partial towards meat can add some bits of ham or sausage. They are also super in chicken noodle soup. Just cut the noodles straight into your chicken stock. It will cure any patient in your household quickly!

PS:  In case you wondered what Spaetzle means: Spatz is the German word for sparrow, adding the -le at the end is how southern Germans create the diminutive version of a noun. Spaetzle means little sparrow. 😉 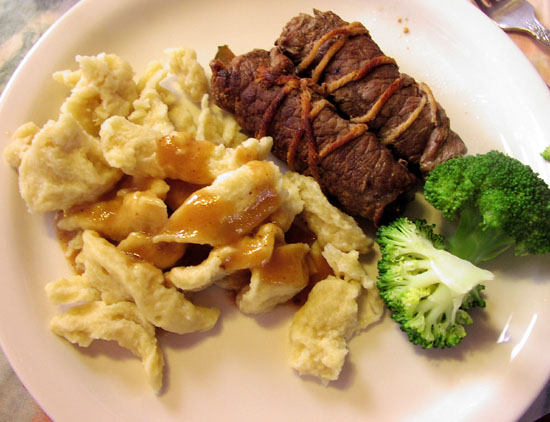