In the first part of this post I spoke about beginning to pare down children’s things, starting with making decisions about pretty obvious things without them. We don’t want to overburden our children with having to make a lot of choices, especially not when it come to greatly reducing their personal things. But I feel it is very important to involve them in the process after much has been cleared out.  My own children have learned that it’s OK to keep things for a time, but then we need to let go of things that are perhaps not of great quality, in keeping with our values, are superfluous,  or simply have been played with just about as much as they’re going to be played with. They’ve learned that some things are special to us and worth holding onto but most things can very easily be let go of. In a society that clings to possessions very fiercely and puts an enormous amount of emotion and sentimentality into things, keeping things, acquiring more things,  I feel this is an exceptionally important value to impart to them. 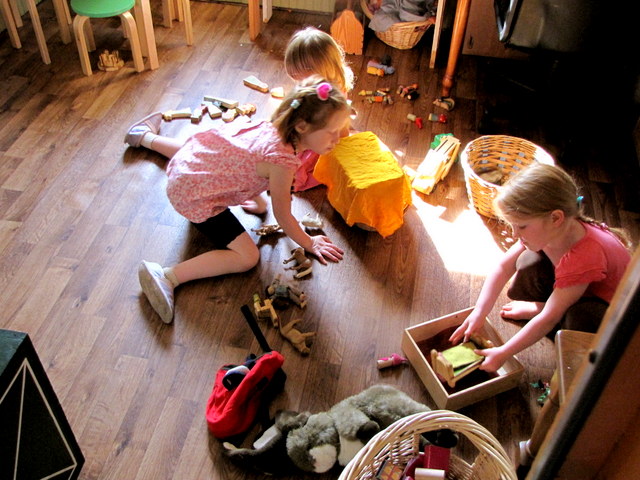 The way I involve my children starts at the very beginning of the process; buying and receiving possessions. I suppose I should start with how we came about replacing plastic toys with natural materials and handmade toys. As I introduced the new pieces in, very slowly,one at a time, I went over these new things with my girls. I told them were each thing came from, from the organic material used to the person who made it (if it was handmade). We talked about how these natural materials are better for our bodies than playing with plastic toys. This really doesn’t have to be an in-depth conversation. On the contrary, your children don’t need a lot of facts and details but can better understand very simple concepts such as healthy for us or not healthy. We did also talk about how things like wood and wool and silk will all go back to the earth after their use is past and plastic will sit in the trash forever. Introducing these concepts will set a foundation for letting go of lesser quality things and being choosy about what we bring in.

So, let’s start with buying. First of all, for my own family, I feel it’s it’s best to stay out of stores as much as possible. To shield not only our children, but ourselves as well, from temptation to buy and want more. Even a trip to the grocery stores is an exercise in marketing to children. From brightly colored, character laden boxes of crackers and cereals, to the clips of small toys randomly hung about. What I’ve observed in my own children is that no matter what it is, when it’s presented in such a way it’s appealing and they want it. This want instills a dissatisfaction and is unsettling for children and frustrating for parents. So we limit our trips to various stores and I try to plan my shopping when my husband can stay home with them or my mom can stay with them. If I do need to take them I make it very clear that  we are there to buy groceries or whatever it may be, and will not be making additional purchases. If there is something that really calls to my children I will allow them to look it over and we can talk about the materials it’s made from, does it perhaps have a place in our home and if it’s something I feel may be worthwhile we keep it in mind for later. It may just be a good opportunity for her to do some odd chores and save up for it herself. Less comes in to the home when a child has to take charge of buying it on their own. For smaller children I find a quick redirection quite effective. 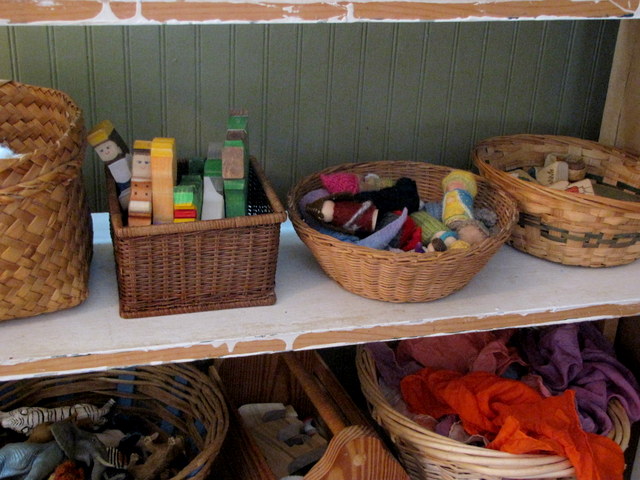 But now what about what’s already in the home, things you didn’t give away or toss? In our home we pretty regularly go through different areas and reevaluate the things that are there.Without judgment I hold up a toy, yes or no, keep or toss. I try to make few additional comments and allow the children to make decisions about their own things without pressure from me. I will occasionally change up the wording.. “Are you ready to let go of this?”, “Are you finished playing with this one?”, “Oh, look, this one is getting worn or has this been played with at all lately?”. If they decide to keep it, even if I’d rather they didn’t, it’s fine. I put it back where it goes and move on to the next thing. But we revisit it again over time and, when the opportunity is presented, they frequently let go of things you never thought they would.

My nephew lives next door and, though  my 4 year old daughter had never seen nor heard about Batman previously, him simply talking about and playing Batman produced such an obsession in her. For months all I ever heard about was Batman, still only fueled through what she learned from her cousin. She played Batman, drew Batman and talked about him incessantly. Eventually my husband (without my consent) bought her a Batman figure. She played with it all day every day and even slept with the hard, plastic figure. Then she learned about his car and my husband once again indulged her and bought the car which came with another Batman. As you can imagine these toys became her favorite and she clung to them, not letting anyone else play with them. I fretted about the Batman obsession and,when we went through the toys, always asked was it time to let them go yet? Eventually she replied that she was ready to let go of the first Batman, since she already had the other. And after a few more months passed she let go of the second, saying she just didn’t play with it much anymore. Finally she decided a Batman car wasn’t much use without a batman and thus ended the Batman obsession and their space was cleared of all traces of him.

My girls always know that when I ask if something is ready to go that it’s their choice. Frequently they tell me no, they’d like to keep it a bit longer. But eventually every little novelty reaches it’s expiration date and they are ready to let it go. But we must present them with the opportunity! They must know that it’s quite alright to keep things awhile and let them go when we’re finished with them. We take a moment to step back and say “Doesn’t that space look so much cleaner now and can’t we get to our things so much better and look how this isn’t overflowing anymore”. The same principle works for unwanted gifts from friends and family. Many of us fret about what our children are given… too much or things we’d rather they not have. Some things simply will not work for our family or are inappropriate and they must go at once. But I find that most things can be enjoyed for a time, but I rest easy knowing that if it’s not something of quality that fits in well with our other things than my children will enjoy it for awhile and let it go when they’re ready. I just don’t worry about it anymore! A word of caution when sorting through their things with them. Be careful not to place your own sentimentality onto their things. If they’re ready to let it go, I feel it’s best to get my own self to the point that I am emotionally ready to let go of those things, too. Things they had had since they were very small, things I made, things that were gifts… If you truly feel it’s worth keeping then skip asking them about it, put it away where it won’t be gone through during this process till you can either let it go if they want to or put it away as a keepsake. I’ve made this mistake and found myself telling my children that I couldn’t let go of something when they were good and ready to. I had to realize it was my own attachment and inappropriate to put that on them. It is exactly what I am trying to move them away from.

OK, this is a topic I probably have much more to say on but I think I will leave it today with just one more tip. My children are 7, 5 and 2. The older two girls each have a box, about a foot squared, that they keep ‘junk’ in. I’m talking about little plastic novelty toys they pick up randomly (just a few), notebooks, wax crayons, oodles of papers, found items… etc. They are not allowed to let them get to the overflowing point and we do go through these regularly just like the rest of their toys (Batman lived in this box). They cannot keep dirty things in there and if it doesn’t fit and has no other place in the home, it’s gone. Knowing they have this box to keep their what-nots in is a sanity saver for me and it gives them control over their own things. They can decide to get rid of other things in the box to make something fit or not. It’s up to them and it’s never a battle. For my 2 year old, there is no box. I still make the decisions about her things, based on my observations of her playing.

Now my children occasionally ask for a small bag to put some things in they want to get rid of. Things they already know they are finished with, with no prompting or direction from me.

I will be back with more on this next week as we go through the things that are keepers and begin to organize the child’s space and make it accessible to them. Any questions feel free to ask in the comments!