I’ve heard many parents say that it’s one thing to overcome the clutter in every room of their homes but their children’s bedroom is another struggle altogether. What is it about children’s spaces that feel so overwhelming and out of control? Too much stuff? Inadequate storage? The children themselves not wanting to take responsibility for their own things and own messes? Perhaps it’s a bit of all of those things, maybe more. But today I’m going to share with you how I’ve handled this in my own home and, in the process, taught my children to pare down  weed out when necessary. 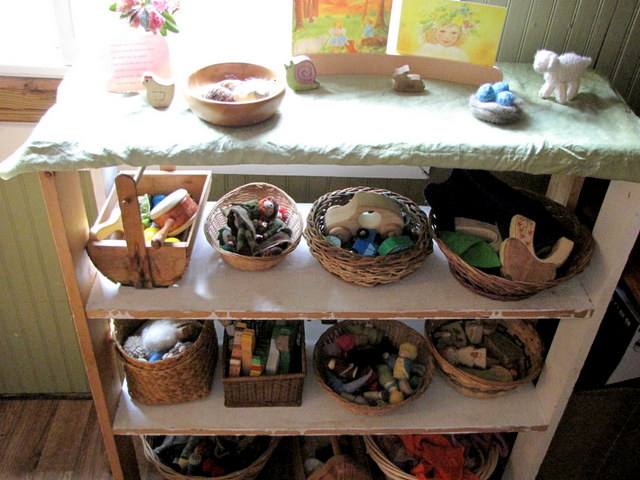 A couple of years ago my girls’ room was cluttered and frequently messy and just full of too much stuff! They could never find what they were looking for, they made huge messes which basically involved pulling out everything just to pull it out and cleaning up was a constant battle. It was also full of things that just didn’t fit our values, ie, plastic and character toys, many things gifts from family. I had begun paring down and simplifying in the rest of the house but their space just seemed like a nightmare. Things came to a head right around the winter holidays and, in a moment of desperation, I took everything out of their rooms. Everything!. I was so stressed out with broken toys and piles of junk that no one wanted to clean up that a clean slate seemed to be the only way to deal with things. It was not a shining moment of motherhood for me. But it did turn out to be a blessing. As I gradually introduced just a few toys back in at a time I was able to sort through the things that I knew we needed to let go of and the girls were learning to be happy with fewer things and were able to finally play fully with their toys. There was no longer all of this stuff vying for their attention, getting in the way, and with fewer choices they were able to just get down and play!

Now, I am certainly not advocating that you take all of your child’s toys away, by any means! I hope that anyone dealing with such a mess will be able to get a handle on it before being driven to desperation such as that. But subsequently I learned that clearing out and simplifying in their space was necessary, not only for my own own mental health but for their well being also. I observed that my children were not happy having lots and lots. On the contrary, it was stressful for them, too. I don’t think we had a huge excess of things, no more than most children’s bed or play rooms throughout the United States (which probably is indeed an excess, but relatively speaking) but children need so very little to spark imaginative play and to, better yet, encourage them to make use of found things and stretch that creative muscle.

So since then, here’s what I’ve found to help us to not only keep things simple and clutter free in the children’s space but to also instill this habit of paring down and letting go of things in them. Teaching them to respect what they do have and yet not to form unhealthy attachments to ‘things’.

1)Less is more. Pare down and keep (or replace with) things that are of good quality.

3)Make their things and space accessible.

Before you can bring your children in to help you go through things I believe that it’s best to go in alone, perhaps when your children are with a friend or their father can take them out to the park. Go in with a giveaway box, a box to put away, and a trash box. It’s too much to expect them to be able to make decisions about a large quantity of things. It is indeed a hard process and you need to be able to make those decisions for them. Keeping in mind that, broken or not, you do not want to trash or giveaway anything that you think they may truly miss, begin by throwing away anything that is broken and overly worn. If it’s not broken but you know that it’s never played with and are certain it’s not going to be missed then go ahead and put it in the giveaway box. Get this box out of the house before they come back! Even if they haven’t played with it in over a year and, otherwise, wouldn’t have played with it ever again, seeing something in a box about to be given away seems to make just about anything that much more appealing.

Now what’s left? Things you know they will want to keep, things you’re not sure about, things you’d just like to see go? If it’s in the latter two categories go ahead and put those things in the put away box(es).  Stick it (or them) in the basement or attic or spare room and wait and see what gets asked for. By the way, if you’re wanting to go plastic free or something of the like, now’s the time to put those things away. When I was going through this process I took quite a bit, more than I was expecting them to be able to let go of, initially. A semi-clean slate really is a good way to start. You can always bring things back in later, but if they’re not missed, then great! Decide how long to wait (a month or so?) and then send that box on to the charity shop. If they ask about something, of course, bring it back out. If you think it really needs to go you can always work on this later.

Next I’m going to talk about involving your children in the process. I feel it’s really important for my children to learn to make decisions about their toys and letting go of things. It’s a tool I wish I’d had instilled in myself at an earlier age, so that I had been able to deal with things all along rather than having to deal with build up later. But that is a topic for another day, next week. Just remember to take it easy on yourself during this process, as it really can be emotionally draining, but well worth it!

Julie Hunter is a wife and mama, raising 3 spirited girls, two babydoll sheep, angora rabbits and a gaggle of chickens and ducks in the North Carolina Foothills. She spends her days at home, crafting with her children, homeschooling, taking long gathering walks in the woods and knitting Waldorf-inspired toys. You can find her blogging and keeping shop at This Cosy Life.