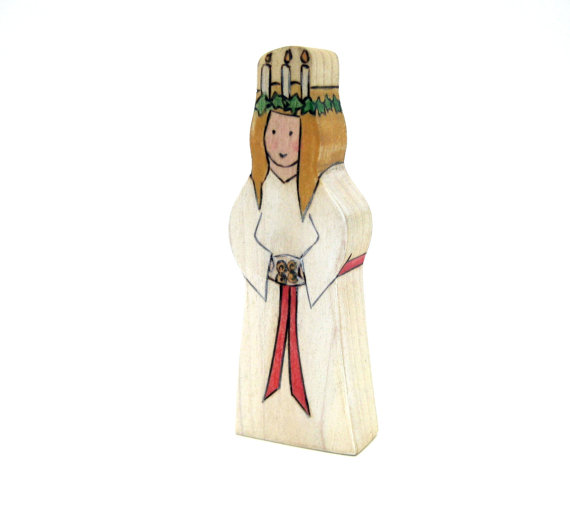 The earliest Natural Kids Team post about the December 13 Swedish festival of light called Santa Lucia Day (also known as St. Lucy, or in Swedish, Sankta Lucia) was written in 2008 by one of the team’s founding members, Haddy2Dogs. You may find that post here. The link includes a recipe for the Santa Lucia saffron buns, also known as lussekatter, or “Lucia cats.”  I myself have used this recipe, and will use it again for this December 13. Good news for those who bake gluten-free: By special request, Nicole Hunn of Gluten Free on a Shoestring has developed a gluten free version of the Lucia buns!

While my family is not of Scandinavian descent, the festival of St. Lucia is special to my family. When my daughter attended a Waldorf school, we looked forward to this particular December festival of light because of the procession of the eldest girl in second grade wearing white with candles on her head, followed by her classmates and teachers (who carried wet rags for safety reasons), singing and bringing Lucia buns to each class.

My daughter would have worn the crown of candles this year, were she still in attendance at that school. We’re still going to have a party, and my daughter will wear one of Haddy2Dogs’s Santa Lucia felted crowns. This year, we’ve invited a few friends to join us at home for Lucia buns, coffee, tea, and cocoa. If we’re organized enough, we’ll even gather enough craft materials to help the children make Star Boy (and Star Girl!) hats. We sent our friends a link to a simplified version of the Santa Lucia song I recorded two years ago. You may listen to the full version here at the Parenting Passageway.

Different members of the Natural Kids Team have made a variety of Santa Lucia dolls for display and creative play. Clicking on the photos will take you directly to the shop links.

Heartfeltpassion has created a Star Boy attendant along with her Santa Lucia figure:

I have made a variety of St. Lucia dolls, which you are welcome to view on my Flickr stream here.

Do you celebrate Santa Lucia Day, or plan to do so?  Please let us know what your celebration entails! As always, the Natural Kids Team looks forward to hearing from you. 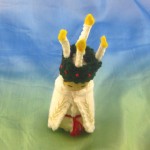 Farida Dowler works as a dollmaker and musical storyteller in Seattle, Washington. Her Etsy shop is called Alkelda. Farida was trained as a children’s librarian (her super-power), and is powerless to resist a request for information (her super-weakness).

Lo, on our theshold there,
White-clad, lights in her hair.
Santa Lucia, Santa Lucia!

I must make an upfront disclaimer–I am not Scandanavian, never celebrated Santa Lucia Day as a child, and have no fond memories or connections to this tradition. But the year Mara was turning three, I was captured by this beautiful tradition, and we have celebrated Lucy ever since.

There are many versions of Lucy’s story, but the one that resonnates with me is one that I created for my homeschool group some years ago.

In our story, a small village on the Swedish coast huddled cold and hungry in the middle of winter. Food was quickly running out, as there had been a bad harvest that year. All of the villagers gathered and shared what they had, but even that was running low. The people despaired–would they have enough food to last until springtime? The days grew darker and darker until one night, it seemed as if the sun would never come back at all. The wise women in the village gathered and sent their prayers to Freya, the Scandanavian goddess of hearth, sun and war, that the sun would return and food would be found. As the village prayed through the longest night of the year, watchers on the shore saw a light appear in the water. What could the glowing on the water be? No one knew. The villagers lit a fire on the shore so that they could see. The light in the water grew brighter and brighter, until they could see that it was a woman with a crown of candles on her head, standing in the prow of a boat that was heading toward the shore. The villagers called out to the boat, and it landed on their shore, full of Italian sailors carrying a boat load of food. “What happened to the woman in the boat?” the villagers asked? The sialors had no idea what the villagers were talking about–but upon hearing the description of the woman, they knew that the villagers had seen their saint, Santa Lucia. The sailors unloaded food from the boat, and the village celebrated, knowing that they would survive the winter.

This week, we will make our Lussekatter, the saffron buns that Lucy carries. The cookies look like eyes (the Italian saint tore out her own eyes–gotta love the lives of saints!), but we like the idea that they are a reflection of Freya’s cats that pull her chariot across the sky. Here’s our recipe for Lucy’s Cats, gleaned from a long-forgotten internet source years and years ago:

Dissolve yeast in warm water (I like to add a bit of honey, too, to make the yeast grow more quickly). Melt the butter, stir in milk, and then add this mixture to the yeast. Beat in the sugar, salt, egg, and saffron, blending until smooth. Add in the flour a cup at a time, and work until smooth. Cover and let rise for 30 minutes. Turn the dough out and knead. Pinch off small pieces of dough and twist into an “S” shape and place on baking sheet (I like to use a stone). Cover and let rise until doubled in size, about 20 minutes in a warm kitchen. reheat oven to 425 degrees. Add raisins in the curves of the “S” and brush with beaten egg. Bake for about 10 minutes or until golden brown. Makes about 2 dozen of Lucy’s Cats.

On Saturday morning, Mara will awaken before us all, come down and make the coffee, load a tray with cats, and bring it to Dave and I in bed. She has a garland, but we don’t light the candles on her head–just a bit tricky getting up the stairs! But we will light the garland as it sits on the table, and we’ll all sing Santa Lucia: