October is a hard month for me. I love the fall season so much because it reminds me of Germany. Finally – a spell of cold – after a long hot summer. The falling leaves of the oak trees in front of my house serve as a reminder of the changing season.
Who would have thought I’d ever miss the rain and cold, the overcast days, and the ever shorter dark days in Germany? 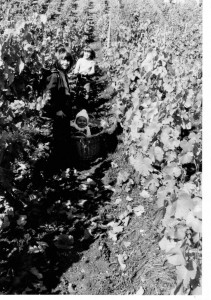 October is a special time in the little communities where I grew up. I was raised in the Rhineland-Palatinate or Rheinland-Pfalz, if you would like to try to pronounce that. It is a famous wine growing region in the West of Germany.

This time of year , as a child, I would be helping with the grape harvest. Even young children would participate. Once you were old enough to hold the clippers for cutting grapes, you’d go out and help. I remember my infant sister being carried in around the vineyard in her bassinet. Every helper would receive a bucket and a pair of clippers You’d be assigned a partner and a row of grape vines to harvest from together. It was hard work. Often we would work in pouring rain. Filling our buckets with grapes, over and over again. Once your bucket was full, you would call out for the “Legelträger,” a person carrying a special bigger bucket strapped to his back, and empty your grapes into the receptacle as he would kneel down in front of you. He then would empty his bucket into a giant green vat. And when that was full, we would all be called on to jump into the vat and mash down the grapes to make space for more grapes.

My husband always jokes about it. He says the only reason I survived was because of my long legs.
It was a pretty sticky business. By the end of the day, you’d be tired and covered in grape juice and have grape leaves stuck in your hair. The smell of the harvest would penetrate deeply into your skin. But the hard labor would be rewarded with a small sum of money – which seemed huge for me as a child.
Now that I am older I fondly remember those days spent outdoors, working and playing in the vineyards.
Some people say that children in the modern world have lost touch with nature. They spend most of their time in front of TV and computer screens. I recently read an article which claimed that the average American child spends between 4-6 hours in front of a screen of one sort or another (Nintendo, other handheld games, Wii) . The article also stated that many children are losing touch with nature because of it.
Why care about the environment if you never spent time outdoors?
I wonder if things have changed in Germany and my memories are just that. Memories. Maybe the modern German child does not participate in the grape harvest. My sisters don’t live that region any more. Maybe machines do all the work now…
I guess what I am trying to say here is: It is important to teach children a connection to nature!” It is so important to play and to work with them outdoors! I am convinced that I would be a very different person if I had not spent so much time surrounded by the soft rolling hills of the German country side where I grew up.
Have a wonderful week! And remember to turn that computer or TV off, and send the kids outside to rake some leaves with you!
=)
Love, Ulla
http://www.germandolls.etsy.com/

15 thoughts on “Trip Down Memory Lane…”